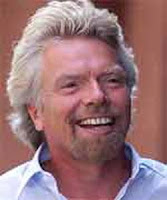 Enjoy this 30-minute video interview with Richard Branson of Virgin everything.

Richard Branson is head of the Virgin Group of Companies. Total income is $25 billion with 50,000 employees. He is a self made billionaire who started with nothing.

Richard Branson was not allowed to watch TV as a child. He left school at age 15 and he is dyslexic. That alone is enough reason to want to learn more about this man.

At 56 he is a long haired, blue-jeaned baby boomer, who pursues death threatening adventure yet pledges his love and support of his family and especially his children.

Sir Richard Branson was knighted in 1999 by the Queen of England even though one of his first successes 25 years ago was the promotion of the Sex Pistols – the first punk rock band that spoofed the Queen with their hit, “God Save the Queen”. I guess you could say that the Queen had a good sense of humor.

What I found most engaging about Richard Branson in this video interview is his self deprecating style, charm and ah-shucks presentation. Be warned! Sir Richard is not a great public speaker. He speaks with a lot of ums and ahs. His posture is self-conscious and uncomfortable. He is neither brash nor slick. Yet despite - or perhaps because of this - he is irresistible.

Sir Richard Branson readily admits his fears and mistakes and makes jokes about his mistakes and himself. He comes across as a person that you could easily enjoy a coffee, tea or beer with while discussing family, business and sports.

There’s no question in my book – Richard Branson is a mensch! 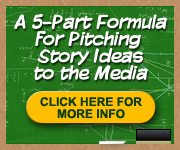